Have you heard the 10 Interesting Facts about Geodes?Geodes (derived from the Greek word “γεώδης” meaning “Earth like”) are geological secondary formation within sedimentary and volcanic rocks. Geodes are hollow, vaguely circular rocks, in which masses of mineral matter (which may include crystals) are secluded. The crystals are formed by the filling of vesicles in volcanic and sub-volcanic rocks by minerals deposited from hydrothermal fluids; or by the dissolution of syn-genetic concretions and partial filling by the same, or other minerals precipitated from water, groundwater or hydrothermal fluids.

Enjoy the 10 Interesting Facts about Geodes.

Igneous rock, or magmatic rock, is one of the three main rock types, the others being sedimentary and metamorphic.Igneous rock is formed through the cooling and solidification of magma or lava. 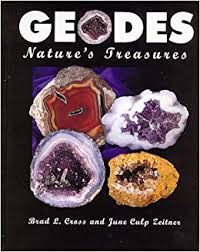 Geodes can form in any cavity, but the term is usually reserved for more or less rounded formations in igneous and sedimentary rocks. They can form in gas bubbles in igneous rocks, such as vesicles in basaltic lava; or, as in the American Midwest, in rounded cavities in sedimentary formations. After rock around the cavity hardens, dissolved silicates and/or carbonates are deposited on the inside surface.

Geode banding and coloration is the result of variable impurities. Iron oxides will impart rust hues to siliceous solutions, such as the commonly observed iron-stained quartz

Geodes are common in some formations in the United States (mainly in Indiana, Iowa, Missouri, western Illinois, Kentucky, and Utah). They also are common in Brazil, Namibia, and Mexico

The world’s largest known crystal cave or vug is Crystal Cave, a celestine geode 35 feet (10.7 m) in diameter at its widest point, located near the village of Put-in-Bay, Ohio, on South Bass Island in Lake Erie

The Messinian Salinity Crisis (MSC), also referred to as the Messinian Event, and in its latest stage as the Lago Mare event, was a geological event during which the Mediterranean Sea went into a cycle of partly or nearly complete desiccation throughout the latter part of the Messinian age of the Miocene epoch, from 5.96 to 5.33 Ma. It ended with the Zanclean flood, when the Atlantic reclaimed the basin.

A lithophysa is a felsic volcanic rock with a small spherulitic cavity and concentric chambers. Its shape is spherical or lenticular.

A thunderegg is a nodule-like rock, similar to a filled geode, that is formed within rhyolitic volcanic ash layers. Thundereggs are rough spheres

Bristol Diamonds are quartz crystals found in geodes and geological rock formations which occur in dolomitic conglomerate in the Avon Gorge in Bristol, England 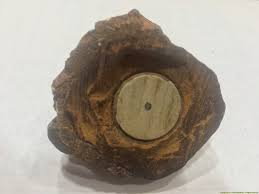 The Coso artifact is an object claimed by its discoverers to be a spark plug found encased in a lump of hard clay or rock on February 13, 1961, by Wallace Lane, Virginia Maxey and Mike Mikesell while they were prospecting for geodes near the town of Olancha, California,