Have you ever heard the 10 Interesting Facts about Gazelles?A gazelle is any of many antelope species in the genus Gazella. This article also deals with the six species included in two further genera, Eudorcas and Nanger, which were formerly considered subgenera of Gazella. A third former subgenus, Procapra, includes three living species of Asian gazelles.Gazelles are known as swift animals. Some are able to run at bursts as high as 100 km/h (60 mph) or run at a sustained speed of 50 km/h (30 mph)

The taxonomy of these genera is confused, and the classification of species and subspecies has been an unsettled issue. Currently, the genus Gazella is widely considered to contain about 10 species. Four further species are extinct: the red gazelle, the Arabian gazelle, the Queen of Sheba’s gazelle, and the Saudi gazelle 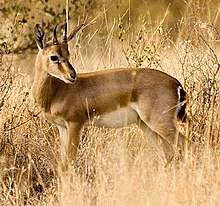 Gazelle is derived from Arabic: غزال‎ ġazāl, Maghrebi pronunciation ġazēl.To Europe it first came to Old Spanish and Old French,and then around 1600 the word entered the English language.The Arab people traditionally hunted the gazelle. Appreciated for its grace, it is a symbol most commonly associated in Arabic and Persian literature with female beauty.

Fossils of genus Gazella are found in Pliocene and Pleistocene deposits of Eurasia and Africa. The tiny Gazella borbonica is one of the earliest European gazelles, characterized by its small size and short legs. Gazelles disappeared from Europe at the start of the Ice Age, but they survived in Africa and Middle East. 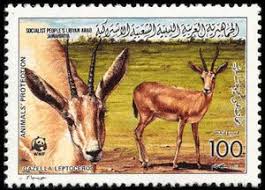 According to Colnet, the stamp pictures a mountain gazelle (Gazella gazella), a species of gazelle widely but unevenly distributed. Mountain gazelle in Arabic is al gazal al jabali.

Israel estimated there to be only 1,210 endangered gazelles in their country. Less than 3,000 mountain gazelles are left within their natural range.

Gazelles have adapted to live in dry, desert-like conditions. They spend most of their time at the top of mountains and hills. Living in an annual average temperature of 21-23°C, gazelles prefer to bed on the tops of the hills/mountains to avoid the heat during the day

The mountain gazelle is a diurnal species, they are awake during the day and sleep at night. They are also very territorial and with their herds, but typically stay in herds of three to eight individuals. There are three main groups in the mountain gazelle community: maternity herds, bachelor male herds, or territorial solitary males.

In the wild, mountain gazelles rarely survive past the age of eight but can live up to 15 years in captivity when taken care of. By 12 months, a female gazelle can begin breeding. For males, 18 months is when they will start breeding.

I hope you like the 10 Interesting Facts about Gazelles.