Have you  heard Facts about Californium?Californium is a radioactive chemical element with symbol Cf and 98 atomic number.Californium was first produced by Stanley G. Thompson, Glenn T. Seaborg, Kenneth Street, Jr. and Albert Ghiorso working at the University of California, Berkeley, in 1950. They bombarded atoms of curium-242 with helium ions using a device known as a cyclotron. This produced atoms of californium-245.

Californium is a synthetic radioactive silvery-white metal of moderate chemical reactivity which is  relatively soft, malleable metal and is easily cut with a razor-blade.It slowly tarnishes in air to the oxide at room temperature,Californium-252 is a very strong neutron emitter.

Facts about Californium 2:The Cyclotron 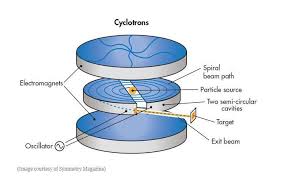 cyclotrons were the best source of high-energy beams for nuclear physics experiments; several cyclotrons are still in use for this type of research. The results enable the calculation of various properties, such as the mean spacing between atoms and the creation of various collision products. Subsequent chemical and particle analysis of the target material may give insight into nuclear transmutation of the elements used in the target.

A neutron moisture meter is a moisture meter utilizing neutron scattering. The meters are most frequently used to measure the water content in soil or rock. The technique is non-destructive, and is sensitive to moisture in the bulk of the target material, not just at the surface.

it  isuseful in a nuclear power plant as a neutron startup source.It is also useful in detecting trace elements in samples by using neutron activation analysis.Some detections like fuel rods, neutron radiography, and portable metal detectors will make use of californium’s neutron penetration property Californium is a radioactive element, therefore it is dangerous for our health.

Californium did not exist in weighable amounts until ten years after its discovery. It is prepared, in milligram amounts only, by the neutron bombardment of plutonium-239.

Facts about Californium 7:Price and Value

. The element was produced from curium and alpha particles, but only a few grams of the element have ever been produced. In today’s world, only a half-gram of Californium is produced each year, so that’s the reason why the price tag on it is so high.The element, particularly Californium 252, is also a valuable trading commodity. In fact, it’s considered as the most expensive chemical because each gram costs al $27 million.

Cf-245 is source of radiation for the treatment of a wide variety of cancers. The medical community was struggling to effectively treat cervical cancer using radiation therapy. When they started using Cf-245 to bombard tumors with neutrons, more lives were being saved.

Timed Neutron Detector is a device that detects landmines. The neutron source of the landmine detector holds a tiny amount of californium-252.