The Cagayan de Oro area was continuously inhabited by Late Neolithic to Iron Age Austronesian cultures. The oldest human remains discovered was from the Huluga Caves, once used as a burial place by the natives

Great White Water Rafting CDO offers the best Cagayan de Oro white water rafting packages,professional guides, quality equipment, celebrity-approved,packages also include food and transfers.Rafting on certain sections of rivers is considered an extreme sport, and can be fatal, while other sections are not so extreme or difficult.

Cagayan de Oro is the regional center and logistics and business hub of Northern Mindanao.[35] The city’s economy is largely based on industry, commerce, trade, service and tourism. Investment in Cagayan de Oro City for the first six months of 2012 reached 7.4 billion pesos outpacing the local government’s expectation of to nearly 100 percent.

Cagayan de Oro’s annual fiesta celebration, popularly known as Higalaay Festival, is a week-long festivity filled with a series of colorful, culturally-rich and fun-filled core events that culminate on the 28th of August  point for a campaign to promote Cagayan de Oro City. 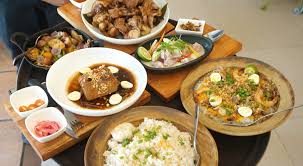 Cagayan de Oro food cultures include a variety of world cuisines influenced by the city’s immigrant history. Western and Austronesian immigrants have made the city famous for pastel bread, chicharrón and Hamon de Cagayan. Some mobile food vendors licensed by the city sell street food like kwek-kwek, fish balls, tempura and proven and grilled meat.

As the oldest sports park in Northern Mindanao, Pelaez Sports Center is also the largest since its renovation in 1998. It features basketball courts, swimming pool, a multipurpose field, and a large oval track.Pelaez Sports Center is the best place to do the morning jog. This is the place qhere most of the Kagayanons do their physical fitness.

The MacArthur Memorial Marker is a landmark at Macabalan Wharf in Cagayan de Oro, Philippines which also serves as one of the attractions of the city. It was also where General Douglas MacArthur, his family and his staff landed in Mindanao during WWII on his way to Australia.

Kumbira, a flagship project of the Cagayan de Oro Hotel and Restaurant Association (Cohara), is a major event in time for the annual fiesta of Cagayan de Oro City in honor of its patron, St. Augustine.

Do you enjoy these 10 interesting Facts about Cagayan de Oro?