These following facts about Amazon Rainforest should probably give you much information about this forest. The Amazon rainforest is the largest tropical rainforest in the world, covering over five and a half a million square kilometres (1.4 billion acres). States or departments in four nations contain “Amazonas” in their names. The Amazon represents over half of the planet’s remaining rainforests, and comprises the largest and most biodiverse tract of tropical rainforest in the world, with an estimated 390 billion individual trees divided into 16,000 species.

Facts about Amazon Rainforest 1: The Name of Amazon

The name ‘Amazon’ is said to arise from a war Francisco de Orellana fought with a tribe of Tapuyas and other tribes from South America. The women of the tribe fought alongside the men, as was the custom among the entire tribe.Orellana derived the name Amazonas from the mythical Amazons of Asia described by Herodotus and Diodorus in Greek legends.

For a long time, it was believed that Amazon forest dwellers were sparsely populated hunter-gatherer tribes. Archeologist Betty J. Meggers was a prominent proponent of this idea, as described in her book Amazonia: Man and Culture in a Counterfeit Paradise. However, recent archeological findings have suggested that the region was actually densely populated. From the 1970s, numerous geoglyphs have been discovered on deforested land dating between 0–1250 AD, leading to claims about Pre-Columbian civilizations. The BBC’s Unnatural Histories claimed that the Amazon rainforest, rather than being a pristine wilderness, has been shaped by man for at least 11,000 years through practices such as forest gardening.One of the main pieces of evidence is the existence of the fertile Terra preta (black earth), which is distributed over large areas in the Amazon forest. It is now widely accepted that these soils are a product of indigenous soil management. The development of this soil allowed agriculture and silviculture in the previously hostile environment; meaning that large portions of the Amazon rainforest are probably the result of centuries of human management, rather than naturally occurring as has previously been supposed.

Facts about Amazon Rainforest 4: The Animals

The region is home to about 2.5 million insect species, tens of thousands of plants, and some 2,000 birds and mammals. To date, at least 40,000 plant species, 2,200 fishes, 1,294 birds, 427 mammals, 428 amphibians, and 378 reptiles have been scientifically classified in the region. One in five of all the bird species in the world live in the rainforests of the Amazon, and one in five of the fish species live in Amazonian rivers and streams. Scientists have described between 96,660 and 128,843 invertebrate species in Brazil alone. 20% of the world’s bird species live in the Amazon rainforest.

Facts about Amazon Rainforest 5: The Plant

The biodiversity of plant species is the highest on Earth with one 2001 study finding a quarter square kilometer (62 acres) of Ecuadorian rainforest supports more than 1,100 tree species. A study in 1999 found one square kilometer (247 acres) of Amazon rainforest can contain about 90,790 tonnes of living plants. The average plant biomass is estimated at 356 ± 47 tonnes per hectare. To date, an estimated 438,000 species of plants of economic and social interest have been registered in the region with many more remaining to be discovered or catalogued. The total number of tree species in the region is estimated at 16,000.

The rainforest contains several species that can pose a hazard. Among the largest predatory creatures are the black caiman, jaguar, cougar, and anaconda. In the river, electric eels can produce an electric shock that can stun or kill, while piranha are known to bite and injure humans. Various species of poison dart frogs secrete lipophilic alkaloid toxins through their flesh. There are also numerous parasites and disease vectors. Vampire bats dwell in the rainforest and can spread the rabies virus. Malaria, yellow fever and Dengue fever can also be contracted in the Amazon region. 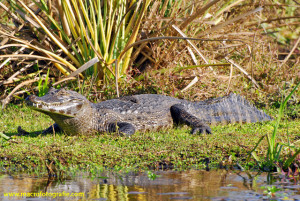 This basin encompasses 7,000,000 square kilometres (2,700,000 sq mi), of which 5,500,000 square kilometres (2,100,000 sq mi) are covered by the rainforest. This region includes territory belonging to nine nations. The majority of the forest is contained within Brazil, with 60% of the rainforest, followed by Peru with 13%, Colombia with 10%, and with minor amounts in Venezuela, Ecuador, Bolivia, Guyana, Suriname and French Guiana.

Deforestation is the conversion of forested areas to non-forested areas. The main sources of deforestation in the Amazon are human settlement and development of the land. Farms established during the 1960s were based on crop cultivation and the slash and burn method.  The soils in the Amazon are productive for just a short period of time, so farmers are constantly moving to new areas and clearing more land. The mean annual deforestation rate from 2000 to 2005 (22,392 km2 or 8,646 sq mi per year) was 18% higher than in the previous five years (19,018 km2 or 7,343 sq mi per year). Deforestation has declined significantly in the Brazilian Amazon since 2004. 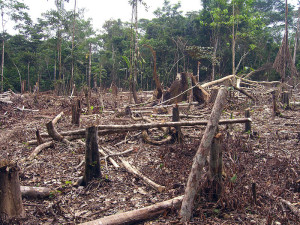 In 2005, parts of the Amazon basin experienced the worst drought in one hundred years, and there were indications that 2006 could have been a second successive year of drought.In 2010 the Amazon rainforest experienced another severe drought, in some ways more extreme than the 2005 drought. The affected region was approximate 1,160,000 square miles (3,000,000 km2) of rainforest, compared to 734,000 square miles (1,900,000 km2) in 2005. The 2010 drought had three epicenters where vegetation died off, whereas in 2005 the drought was focused on the southwestern part.

Hope you would find those Amazon Rainforest facts really interesting, useful and helpful for your additional reading.